Anne Sears, the State of Alaska’s investigator for Missing and Murdered Indigenous People, stands in front of the Alaska State Capitol on May 5, 2022. (Lisa Phu / Alaska Beacon)

When Anne Sears spoke in front of a crowd of more than 100 people on the Alaska State Capitol steps for the Missing and Murdered Indigenous People rally on May 5, she wore a red scarf that belonged to her mom. “She passed away a couple of years ago. I think she’d be beyond words to see where I have come today,” Sears said to the crowd.

Sears is Inupiaq, born in Nome and spent a lot of her childhood and adult life in Juneau. She spent 22 years in law enforcement and was the first Alaska Native woman hired to be an Alaska State Trooper. She worked as one in Palmer, Galena, Nome, Fairbanks and Kotzebue, and retired in October 2021. Now, she’s the state’s investigator for missing and murdered Indigenous people with the Alaska Bureau of Investigation, the first position of its kind in the state.

“Being in law enforcement for 22 years, being an Indigenous woman, being born and raised in the state of Alaska, having lived all over Alaska growing up, then working all over Alaska as a state trooper and being in public service for 30 years has kind of all culminated in this one position, this one purpose, this one issue,” Sears said in an interview before the rally. 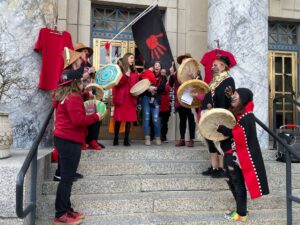 Participants at the Missing and Murdered Indigenous People rally sing and drum on the steps of the Alaska State Capitol on May 5, 2022. (Lisa Phu / Alaska Beacon) 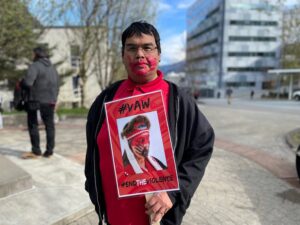 William Wellington participates in the Missing and Murdered Indigenous People rally in Juneau on May 5, 2022. (Lisa Phu / Alaska Beacon) 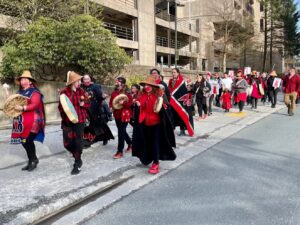 The Missing and Murdered Indigenous People Rally and March started at the Alaska State Capitol and ended at the Elizabeth Peratrovich Hall. (Lisa Phu / Alaska Beacon) 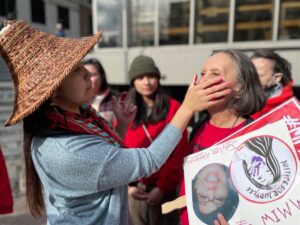 Candace Frank gets a red handprint pressed onto her face at the Missing and Murdered Indigenous People Rally in Juneau on May 5, 2022. (Lisa Phu / Alaska Beacon)

Across the country, thousands of cases of missing and murdered Indigenous people are unsolved and many go unreported. Of states with the highest number of missing and murdered Indigenous women and girls cases, Alaska is fourth, according to a report by the Urban Indian Health Institute. Anchorage ranks third in top 10 cities with the highest cases. The Centers for Disease Control and Prevention listed murder as the third leading cause of death for American Indian or Alaska Native women in 2016.

Sears will work on unsolved cases across the Alaska State Troopers’ area of responsibility. “The newest one is like a year and a half old; the oldest one that I have been made aware of is 40 years old,” she said. “I want to look at those cases, see if there’s anything that I see differently, something new or maybe something that was already there and we just need to work on a little bit more.”

Among her priorities, Sears is planning to look into the Florence Okpealuk case. Okpealuk was last seen in Nome in August 2020. The search for Okpealuk, who was 33 when she went missing, lasted months. The Nome Police Department led the investigation, with assistance from the FBI Anchorage Field Office, the Alaska State Troopers, the Nome Volunteer Fire Department Search and Rescue Team, and the U.S. Coast Guard.

Sears also plans to relook at Angela Foxglove’s case. Foxglove was 18 when she went missing from Selawik in 2007. Sears got many phone calls from the family about the case when she was a trooper in Kotzebue.

Sears returns the phone calls and replies to the emails. “When I talk to the families, I have to be clear that there are no promises made, but that I am going to take a look at the case involving their loved one. I can’t promise anything. I don’t want to give anybody false hope. I would love to be able to tell them that I will solve it, that we’ll find their loved one. But you can’t do that,” Sears said.

The march and rally in Juneau for Missing and Murdered Indigenous People (MMIP) last week was organized by the Central Council of the Tlingit & Haida Indian Tribes of Alaska Violence Against Women Task Force. Juneau resident Candace Frank was there holding a sign with a picture of her relative Judylee Guthrie, a woman from Hydaburg who was murdered in 2016. Frank said it was important to be at the rally to bring awareness and attention to the issue of MMIP. She’d heard about Sears’ new position.

“That’s a really good thing. So we might start getting some answers for some people because it’s really important to have closure,” Frank said. “We need to figure out what’s going on with all these women. We truly do.”

Sears wants to bring that closure to families. She also wants to work with tribal and community partners to create preventative resources about MMIP, though she isn’t yet sure what that will look like.

Need to get in touch?

Have a news tip?

“I feel very strongly that domestic violence, sexual assault, sexual abuse, stalking, and sex trafficking are tied in with missing and murdered. We need to talk about these things. They need to be out in the open, not a secret,” Sears said.

Lisa Phu covers justice, education, and culture for the Alaska Beacon. Previously, she spent eight years as an award-winning journalist, reporting for the Juneau Empire, KTOO Public Media, KSTK, and Wrangell Sentinel. She's also been Public Information Officer for the City and Borough of Juneau, lead facilitator for StoryCorps Alaska based in Utqiagvik, and a teacher in Tanzania and Bhutan. Originally from New York, Lisa is a first generation Chinese American and a mom of two young daughters. She can be contacted at [email protected]

Alaska activist describes decades dedicated to anti-abortion… by Lisa Phu December 2, 2022
Alaska doctor, once the focus of outrage, reflects on past… by Lisa Phu November 16, 2022
Two people die after just one day in Alaska corrections… by Lisa Phu August 31, 2022