Democrat Mary Peltola will become the first woman to represent Alaska in the U.S. House of Representatives and the first Alaska Native ever to serve in Congress.

The former state legislator and current tribal fisheries leader is the first Democrat to win a U.S. House race here in 50 years and will serve the remaining four months of the term left unfinished by the death of Congressman Don Young in March.

Peltola defeated Republican candidates Sarah Palin and Nick Begich in ranked choice voting results announced Wednesday, Peltola’s 49th birthday. All three candidates, plus Libertarian Chris Bye, will be on the ballot again in November as they seek election to a full two-year term.

“I’m just extremely grateful for the Alaskans who had faith in me and elected me to fill out the remainder of Congressman Young’s term,” Peltola said as she prepared to leave a post-result event, “and I am very hopeful that I can continue his legacy of working for all Alaskans and thinking about how to best meet Alaskans’ needs here during the short seat, but of course, saying focused on November and the two-year seat.”

The results remain preliminary, but the number of outstanding votes is not expected to change the results.

After the results were announced, Peltola was exuberant, celebrated with supporters and received a congratulatory call from President Joe Biden.

Palin denounced the ranked choice voting system, served cake to backers, and called for Begich to withdraw from the race for the full term.

Begich said in a written statement that Wednesday’s results match “what pollsters have been telling us for months; Sarah Palin cannot win a statewide race because her unfavorable rating is so high.”

Wednesday’s results indicated few Alaskans had problems voting in the state’s first ranked choice election. Only 295 ballots, or 0.15% of those cast, were unable to be counted for at least one candidate.

Alaskans for Better Elections, the group that backed the installation of ranked choice voting, called the vote a success. Officials at the Alaska Division of Elections, which ran an intensive education campaign for a year and a half, also were in a celebratory mood about the apparent success of that campaign, whose timeline was compressed after Young’s death triggered a special election.

A special pick-one primary election in June — Alaska’s first election to be conducted principally by mail — narrowed a field of 48 candidates to four, and the withdrawal of nonpartisan candidate Al Gross narrowed the options to a final three.

Alaskans picked their preferences on Aug. 16, and Peltola led after election day with 39.7% of first-choice votes, followed by Palin with 30.9% and Begich with 27.8%. 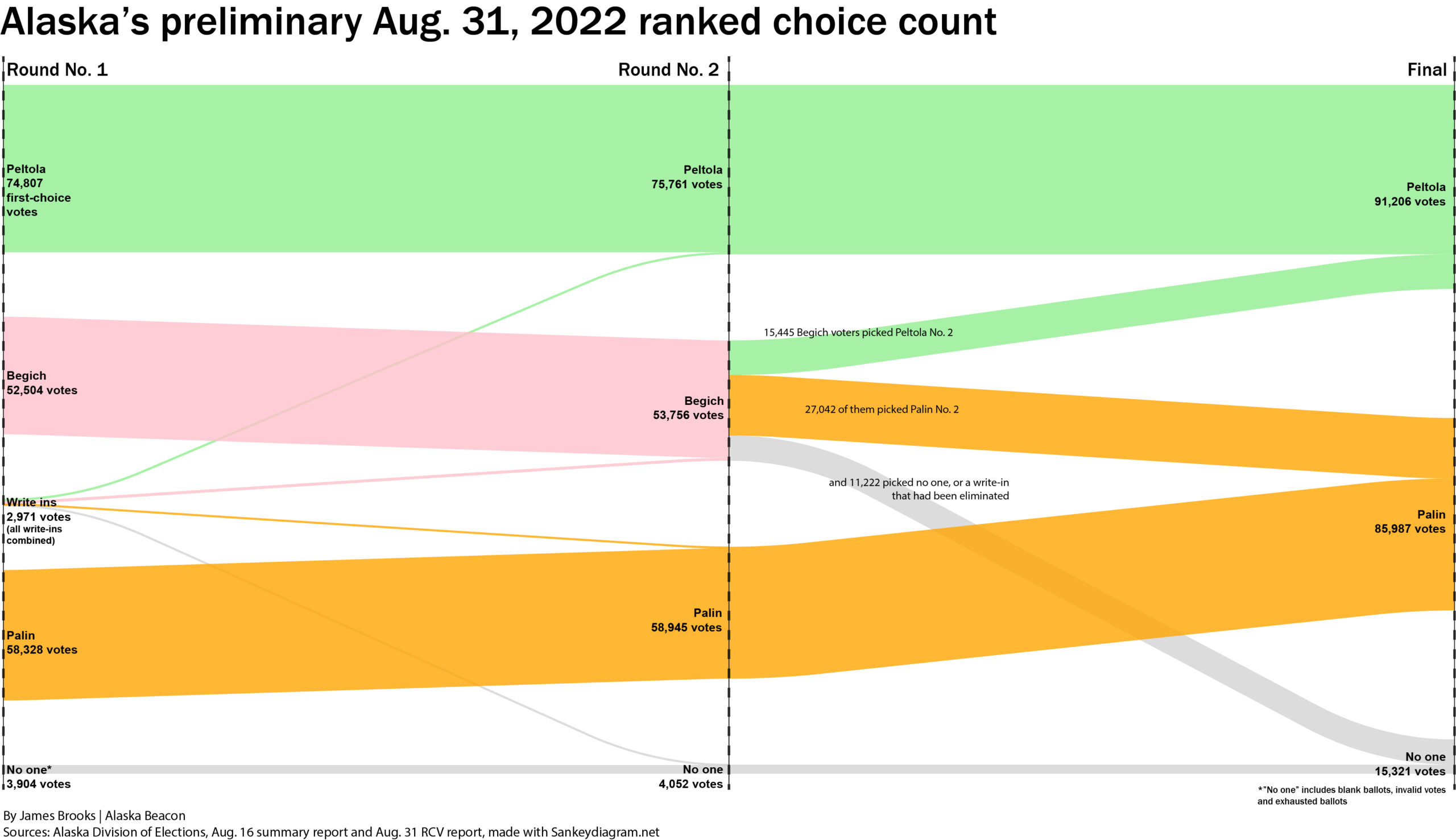 The remaining votes weren’t enough for Palin to overcome Peltola’s lead. In Wednesday’s final tally, Peltola had 91,206 votes and Palin 85,987.

That result came even as Republicans turned out to vote in disproportionately large numbers: Registered Republicans make up 24% of the state’s registered voters but represented 31% of voters in the election, according to an analysis conducted by Juneau computer programmer Will Muldoon. Women, who make up 48.7% of the electorate, cast 50.9% of the votes.

The result isn’t final, but Alaska Division of Elections Director Gail Fenumiai said she believes there are fewer than 1,000 ballots of all kinds left to be counted.

That work could be finished as soon as Friday. After certification, candidates have five days to request a recount, and because the difference between first and second place was wider than 0.5%, the requestor will have to pay for any recount.

Any legal challenge to the results must be filed by Sept. 12. It isn’t yet clear when Peltola will be sworn into office and officially take her seat.

“We can’t be disheartened,” she said. “In fact, I think God prepared me for an outcome like this, believe it or not. I think God has kind of given me peace all along.”

The former governor said she does not expect to challenge the lawsuit legally but will campaign hard against ranked choice voting.

In an appearance with former President Donald Trump during her campaign, both Palin and Trump urged voters to pick only one candidate.

That message was at odds with a campaign from the Alaska Republican Party, which urged voters to “rank the red,” effectively voting for both Palin and Begich, in either order.

Wednesday’s results showed most Begich supporters did follow that instruction, but not enough to make Palin the winner.

All three candidates, plus Bye, shared a debate stage at the Alaska Oil and Gas Association’s annual meeting shortly before the results were announced.

“As an Alaskan who was born and raised here and intends to be here the rest of my life, the fine people on this stage, I’m going to be working with them for the rest of my life. So you are not going to hear me say anything bad about any of the other leaders that are in this race,” Peltola said “I do have 10 years of experience in the Legislature. You can’t do 10 years of public service without disagreeing with half the people all the time. So I do have experience. I’ve got experience working across party lines with everyone and anyone. And I would love to be your representative in Washington, D.C.”

GET THE MORNING HEADLINES DELIVERED TO YOUR INBOX

James Brooks is a longtime Alaska reporter, having previously worked at the Anchorage Daily News, Juneau Empire, Kodiak Mirror and Fairbanks Daily News-Miner. A graduate of Virginia Tech, he is married to Caitlyn Ellis, owns a house in Juneau and has a small sled dog named Barley. He can be contacted at [email protected]