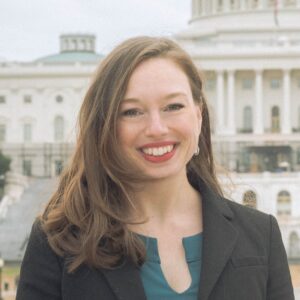 Ashley Murray covers the nation’s capital as a senior reporter for States Newsroom. Her coverage areas include domestic policy and appropriations.

Chinese surveillance balloon now drifting across the middle of the U.S., Pentagon confirms

WASHINGTON — U.S. Secretary of State Antony Blinken will postpone his planned trip to Beijing after the U.S. detected a Chinese surveillance balloon hovering over Montana. A senior State Department official said Friday that despite the Chinese government claiming the balloon had entered U.S. airspace accidentally, its presence was a “clear violation of sovereignty.” The […]

WASHINGTON — On a June 2020 morning, Amy Neville entered her son’s bedroom to wake him for an orthodontist appointment.  Fourteen-year-old Alex didn’t wake up.  He died of fentanyl poisoning after taking a counterfeit pill he bought from someone he met on Snapchat, Neville told GOP lawmakers Wednesday during a roundtable discussion of the role […]

Ukrainians by the thousands arrive in states, but with a time limit

WASHINGTON — As the one-year anniversary of Russia’s full-scale invasion of Ukraine approaches next month, Ukrainians who were welcomed to the United States under a special program offering an escape from war are watching another timeline.  The temporary Uniting for Ukraine program, sometimes called U4U, offers a two-year stay in the U.S., given that individuals […]

WASHINGTON — The U.S. House adopted rules for the 118th Congress on Monday, though several of the concessions Speaker Kevin McCarthy made with more conservative members of the Republican Party to secure the gavel weren’t included in the document, or publicly circulated ahead of the vote.  The 55-page rules package the House voted nearly party-line […]

This story has been updated. WASHINGTON — The U.S. House elected Kevin McCarthy speaker early Saturday after most of the chamber’s Republicans finally gathered behind him, ending a four-day stalemate that led to the most rounds of voting for a speaker since before the Civil War.  The California Republican was able to clinch the gavel […]

U.S. House stuck for a third day as Republicans struggle to unite around a speaker

This story has been updated. WASHINGTON — The U.S. House adjourned Thursday again without a speaker, racking up five more ballots throughout the day before members left the floor shortly after 8 p.m. Eastern, with some decamping to closed-door negotiations and others leaving the Capitol. “I am not a part of any negotiations,” Colorado’s Lauren […]

This story has been updated. WASHINGTON — The U.S. House adjourned without a speaker for the second day in a row Wednesday as Republicans’ stalemate over who should lead the chamber for the next two years dragged on, with Kevin McCarthy failing to get the votes needed to become speaker on three more ballots. The […]

Conservatives in U.S. House tank McCarthy bid to be speaker on multiple ballots

WASHINGTON — Republican control of the U.S. House got off to a rocky start Tuesday when the party was unable to decide who should become speaker amid a sharp disagreement within the party’s more conservative faction.  California Rep. Kevin McCarthy didn’t clinch the backing of the 218 lawmakers he needed to become the head of […]

WASHINGTON — The U.S. House Jan. 6 committee late Thursday published its findings in a nearly 850-page report that accused former President Donald Trump of inciting an insurrection and recommended Congress consider how to determine whether those found to be insurrectionists should be barred from holding office ever again. The report caps 18 months of […]

Zelenskyy pledges a fight for ‘common victory’ against Russian tyranny in visit to U.S.

WASHINGTON — President Volodymyr Zelenskyy evoked images of the “great American soldiers” of World War II as he appealed to Congress Wednesday night to continue U.S. assistance in defending Ukraine from deadly Russian shelling and targeting of civilian infrastructure. The historic and surprise visit to the United States by the wartime Ukrainian leader marked his […]

WASHINGTON — Any last hopes of resurrecting the expanded child tax credit as part of Congress’ massive spending package were dashed early Tuesday when the 4,155-page bill was released without a mention of the tax benefit. The temporary expanded child tax credit, part of a COVID-19 relief deal in 2021, allowed more low-income families, including […]