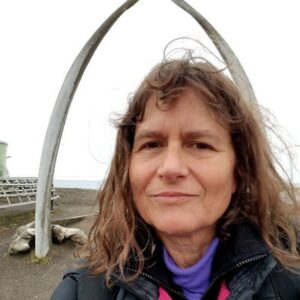 Yereth Rosen came to Alaska in 1987 to work for the Anchorage Times. She has been reporting on Alaska news ever since, covering stories ranging from oil spills to sled-dog races. She has reported for Reuters, for the Alaska Dispatch News, for Arctic Today and for other organizations. She covers environmental issues, energy, climate change, natural resources, economic and business news, health, science and Arctic concerns -- subjects with a lot of overlap. In her free time, she likes to ski and watch her son's hockey games.

In northernmost Alaska, a battle is on to limit the damages of permafrost thaw

Nearly 20 feet below the ground of a field of open tundra in the nation’s northernmost community, an icy world gives a picture of the ancient past and the future of this part of the Arctic. Embedded in the walls of a tunnel is frozen peat, its features perfectly preserved from 10,000 years ago.  “It’s […]

A controversial auction for rights to drill for oil and gas in the federal waters of Alaska’s Cook Inlet drew only a single bid, according to results released on Friday. Hilcorp Alaska LLC, the dominant oil and gas operator in the Cook Inlet basin, submitted the sole bid in the lease sale held by the […]

One of the biggest caribou herds in North America has taken a nosedive, and climate change is a likely culprit in the population decline. Alaska’s Western Arctic Caribou Herd population is lower than at any time in over four decades, with numbers put at 164,000, down from a high of nearly 500,000 in 2003, according […]

A former Alaska resident once threatened with imminent deportation to Mexico because of a paperwork glitch involving her adoption as a newborn has now been granted permanent resident status and a path to citizenship. Rebecca Trimble is the subject of private legislation that was championed by the Alaska Congressional delegation and signed into law by […]

Aid to Alaska fishermen, companies and communities was included in the year-end omnibus appropriations package that won final passage on Friday. The $300 million in aid funding follows official disaster declarations issued last week by U.S. Commerce Secretary Gina Raimondo for Alaska salmon and crab fishery failures dating back to 2020, as well as some […]

A lone polar bear cub that was wandering the Prudhoe Bay oil field has been evacuated and sent to the Alaska Zoo in Anchorage, the U.S. Fish and Wildlife Service announced. It was a rare and drastic step because removal of polar bear or any marine mammal from the Arctic is permanent. In this case, […]

A canceled but subsequently revived oil and gas lease sale in federal waters off Alaska is being challenged by a coalition of environmentalists. In a lawsuit filed Wednesday in U.S. District Court in Anchorage, the environmental groups said the Biden administration had failed to adequately evaluate the impacts of next week’s lease sale offering 958,202 […]

Alaska teens have largely ditched cigarettes over the past two decades, but they have substituted that unhealthy habit with another: vaping. About a quarter of surveyed high schoolers reported using electronic cigarettes in the past 30 days, according to the Alaska Tobacco Facts Update, released last week by the Alaska Department of Health. The national […]

Alaskans’ life expectancy dropped and death rate rose in 2021, with COVID-19 ranking as the third-highest cause of death during the year, according to the Vital Statistics Annual Report released last week by the Alaska Division of Public Health. The difference between 2021 and 2020 was driven mostly by COVID-19. In 2021, there were 6,216 […]

Less than five years ago, prospects appeared bright for Bering Sea crab fishers. Stocks were abundant and healthy, federal biologists said, and prices were near all-time highs. Now two dominant crab harvests have been canceled for lack of fish. For the first time, the Alaska Department of Fish and Game in October canceled the 2022-2023 […]

U.S. Commerce Secretary Gina Raimondo on Friday approved disaster declarations for several distressed fisheries, including the recently canceled Bering Sea snow crab and Bristol Bay red crab harvests. The declarations are for poor or closed Alaska harvests going back to 2020. They cover failures in the crab fisheries for this season and last season, the […]

A dead brown bear cub found on Kodiak Island is one of the latest signs that the current strain of highly pathogenic avian influenza behind the deaths of tens of millions of birds is continuing to circulate in wild populations, infecting a variety of species. The cub carcass, discovered on Nov. 26 by a local […]